Pakistan Tehreek-e-Insaf (PTI) Chairperson and former premier Imran Khan called on President Dr Arif Alvi to ‘act now’ and stop the abuse of power as well as the violation of laws and the Constitution.

In a letter to the president on Sunday, the former premier stated that since the removal of the PTI government, the country has been “confronted with an ever-increasing scale of false allegations, harassment, arrests, and custodial torture”.

“The plot was operationalised earlier this week during our long march, but Allah saved me and the assassination attempt failed,” he stated.

Imran requested that as the head of the State of Pakistan and “also as the Supreme Commander of the Armed Forces under Article 243 (2)” of the Constitution, President Alvi take note of the “following serious wrongdoings that undermine Pakistan’s national security”.

He further asked Alvi to lead an inquiry to identify the guilty “and hold them accountable”.

Firstly, he maintained that “a breach of the Official Secrets Act occurred when [a] confidential conversation between myself as PM, the COAS [chief of armed staff]” and another military official were leaked to the media.

He claimed that this raised the “very serious question as to who or what organisation was involved in doing a clearly illegal wiretap of the PM’s secure phone line”, adding that the incident was a breach of national security at the highest level.

In his second point, he stated that the issue of the cipher was “sent by our ambassador to the US in which the US official conveyed a direct threat of regime change to our envoy who reported the same in quotes as was conveyed to him”.

He furthered that the National Security Council meeting held on the issue during his reign as the premier “clearly decided this was an unacceptable intrusion into our internal matters and the NSC decided on a demarche to be issued by MoFA to the US envoy in Islamabad”.

Imran further stated that the NSC decision was “reaffirmed by the NSC meeting held under the Shehbaz Sharif government”.

“In view of this, a joint press conference held on 27 October 2022 by the DG ISI and the DG ISPR that had the former contradicting the decision made by the NSC under two governments and stating that the message of the US government conveyed by our envoy in Washington DC in the Cipher was not an unacceptable intrusion into our internal affairs but simply a case of ‘misconduct’”.

He questioned how two military officials could “publicly contradict a decision of the NSC” and pointed to the “serious issue of these military bureaucrats deliberately trying to create a false narrative”.

According to the PTI chief, two other questions that should be investigated were “how the head of Pakistan’s premier intelligence agency can do a public press conference”; and “how can two military bureaucrats do a highly political press conference targeting the leader of the largest and perhaps the only federal political party in Pakistan today”.

Lastly, Imran stated that “the parameters of a military information organisation such as the ISPR also need to be clearly defined and limited to information relating to defence and military issues”.

He called on President Alvi “as Supreme Commander of the Armed Forces” to initiate the “drawing up of these clear operational lines for the ISPR”.

Imran stated that he and the president led Pakistan and that Alvi “must protect its democracy and its Constitution”.

“No person or state institution can be above the law of the land,” he said.

The deposed premier reiterated that the country was observing a “massive abuse of citizens at the hands of rogue elements within state organisations, including custodial torture and abductions”, all of which he claimed were “carried out with impunity”.

“You hold the highest Office of State and I am requesting you to act now to stop the abuse of power and violations of our laws and of the Constitution, which ensures the fundamental rights of every citizen,” Imran concluded. 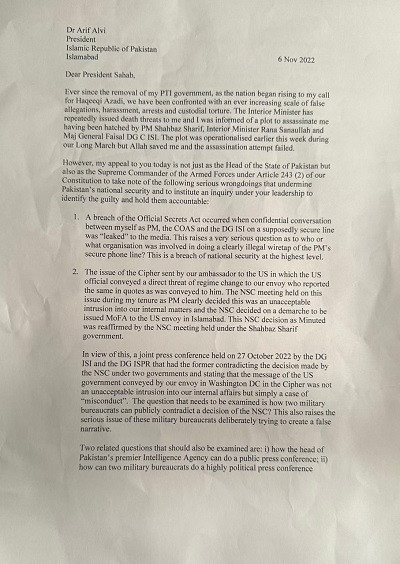 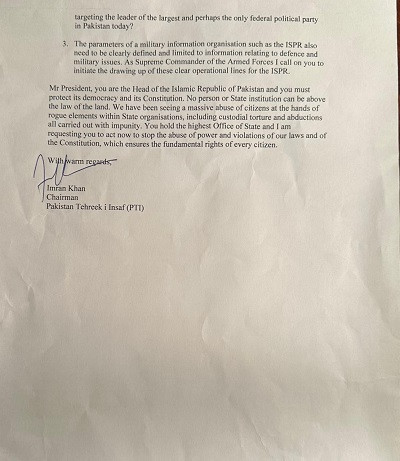 Related Topics:Featured
Up Next

K-P up in arms against custodial torture

Imran’s right of defence struck out in defamation case


Additional District Judge Lahore Chaudhry Muhammad Asif struck out the right of defence of former prime minister since concerned interrogatories of the plaintiff were not submitted on Thursday.

The court asked the plaintiff to submit a list of witnesses on November 29.

It has been learned that the court has so far conducted 78 hearings of the case.

The order stated that the counsel for the defendant submitted an application for adjournment on the ground that the defendant was going to file a revised petition against the order of the court regarding the dismissal of concerned objections of the defendant.

“From the perusal of record, it reveals that various reasonable opportunities have been provided to defendant to submit the requisite replies to concerned interrogatories of the plaintiff but the defendant has not done the needful,” it stated.

“Vide previous order dated 17.11.2022, one more opportunity was granted to the defendant in this regard with the clarification that in case of submission of requisite replies from the defendant’s side regarding concerned interrogatories of the plaintiff on the next date, the right of defence of the defendant shall be struck out. No lawful justification exits for the grant of further adjournment,” it added.

The court rejected the adjournment plea of Imran’s counsel.

According to details, the defamation suit states that Imran started uttering false and malicious statements against the plaintiff (Shehbaz) that the latter offered Rs10 billion to the former through a common friend in exchange of withdrawing the case of Panama Papers pending before the Supreme Court (SC).

​​​It pleads that the baseless and defamatory statements by the defendant widely circulated by media lowered the integrity of the plaintiff and caused him extreme mental torture, agony and anxiety. The court has been requested to issue a decree for recovery of Rs 10 billion as compensation for the publication of defamatory content in favour of the plaintiff.

In his written statement, the Pakistan Tehreek-e-Insaf (PTI) chief states that one of his friends told him that someone known to him and also the Sharif family approached him with an offer to pay billions of rupees if he could convince him to stop pursuing the Panama Papers case.

Imran says that he disclosed the incident for the consumption of the public at large and in the interest of the public good does not constitute any defamation.


Pakistan and Bangladesh will each be sending an armed helicopter unit to the UN peacekeeping operations in Mali, which faces serious problems as several countries have withdrawn or announced plans to pull out their personnel, a UN spokesperson said on Wednesday.

Spokesman Farhan Haq said that India will supply a utility helicopter unit to the Multidimensional Integrated Stabilization Mission in Mali, known as MINUSMA, and all three are expected to be deployed by March next year.

“These provide much-needed support to our forces and are critical for early warning and rapid response to protect civilians,” the spokesman told reporters at the regular noon briefing at the UN headquarters in New York.

“The UN continues to discuss with member states the deployment of new assets and plans to fill longer-standing gaps in addition to those resulting from recent announcements” of withdrawals, he said.

Set up in 2013, MINUSMA has 17,622 personnel helping the Malian government combat terrorists operating in the country.

MINUSMA is one of the deadliest operations having claimed the lives of 292 peacekeepers.

France completed its withdrawal earlier this year and it was followed by Egypt in August.

Germany said that it was withdrawing its personnel, who numbered 595 in the latest UN roster, from MINUSMA by May next year.

Britain is also pulling out its 249 personnel.

Ivory Coast also said that it would discontinue the participation of its personnel, who numbered 898, in MINUSMA when the current deployment ends because of a separate dispute with the Mali government over the arrest of its soldiers who went there on a mission unconnected to the UN.

Despite the dangerous nature of the Minusma, Pakistani military doctors serving in Mopti, a town in the fifth administrative region of Mali. have continued to serve, earning praise for their work. They operate a state-of-the-art hospital staffed with 75 medical personnel, including 10 women and 65 men, according to the UN.

The hospital operates 24 hours a day, every day, and they are always on alert. All specialities are covered, from pharmacy to gynaecology. However, its main purpose is to perform life-saving and urgent surgery when peacekeepers are injured, it was pointed out.

Imran urges ‘all Pakistanis to participate’ in PTI long march

Former prime minister and PTI Chairman Imran Khan on Thursday urged all Pakistanis to participate in his party’s much-hyped long march on Saturday (Nov26) in what appears to be his final showdown with the incumbent government to force it to announce early election date.

“Dear Pakistanis, I want all of you to participate in our haqeeqi long march in Pindi at 1pm on Saturday,” he said in a short video statement.

Imran, who was removed from power through a vote of no confidence in April, said that only a nation which has justice in it will get real freedom. “When there is justice, there are rights. When there are rights, a nation is free. Only an independent nation is prosperous,” he went on to say.

The former premier said that the nation will not stay silent until it gets real freedom. “I am coming for you despite my [health] condition and all of you need to come to Pindi for me,” he concluded.

Meanwhile, senior PTI leader Asad Umar presided over a meeting regarding the party’s preparation for the long march in Rawalpindi. Senior PTI leadership including Umar Ayub, Shibli Faraz, Ali Nawaz and others participated in the meeting.

The meeting discussed the overall preparations for the long march in Rawalpindi. The security plan, long march route and other significant matters came under discussion during the meeting.

The meeting was briefed that a caravan had left from Karachi for Rawalpindi whereas two others were ready to begin their journey to the garrison city from Quetta and Gilgit-Baltistan.

A briefing was also given in the meeting regarding the accommodation of the participants.

Issues regarding the provision of all basic needs including food and accommodation to the participants of the march were also discussed in the meeting.

“The nation is fully united and eager to achieve real freedom,” Umar said, adding that the party would welcome caravans from all over Pakistan in Rawalpindi.

“The captain [Imran Khan] will lead the ocean of people in Rawalpindi on November 26,” he further said.

Imran’s right of defence struck out in defamation case

Imran urges ‘all Pakistanis to participate’ in PTI long march

help your child connect with care